Blockchain Will Disrupt Expedia, Priceline, Airbnb ... and all other OTA

Blockchain is the underlying technology behind Bitcoin, the cryptocurrency which currently has a market cap of some $200 billion. While Bitcoin was created to be a digital currency that eliminates the traditional middle-men in money, many argue that Bitcoin-derived blockchain technology is the greater innovation of the two. We interviewed Fritz Joussen after his presentation at the Noah Conference in Berlin a couple of weeks ago.

Will blockchain be the next Internet?

Fritz Joussen, CEO of TUI Group, believes it will.

“It takes away the monopoly of knowledge from a few platforms,” he said.

Blockchain is the underlying technology behind Bitcoin, the cryptocurrency which currently has a market cap of some $200 billion. While Bitcoin was created to be a digital currency that eliminates the traditional middle-men in money, many argue that Bitcoin-derived blockchain technology is the greater innovation of the two.

Blockchain is essentially a distributed database to which data can only be appended, which means that historic data cannot be lost nor corrupted.

We interviewed Fritz Joussen after his presentation at the Noah Conference in Berlin a couple of weeks ago.

Joussen argues that blockchain will break the almost-“monopolistic” hold that Priceline, Expedia, and Airbnb hold in today’s lodging and distribution ecosystem. That may be overstating their grip on distribution, but we get the point.

“It will be very difficult for intermediaries to have sustainable business cases,” he said. “These platforms [travel intermediaries] build reach by spending billions on advertising, and then they create monopolistic margins on top of what they have as sales and marketing. They do offer great sales and marketing. Booking.com is a great brand, but they create superior margins because they have monopolistic structures. Blockchain destroys this.”

Since the release of Bitcoin in 2009, the blockchain space has seen a lot of innovation with new platforms such as Ethereum and Lisk creating a blockchain for developers to build upon.

Joussen’s vision of blockchain was a key reason Tui Group last year for $1.2 billion, moving TUI out of the role of business-to-business intermediary, which he believes blockchain can easily replace. The idea was to establish TUI as a truly vertically integrated company.

TUI has already moved all of its contracts onto its private blockchain. “We are using it today predominantly to have mechanisms to swap bedstock between different PMSs [Property Management Systems],” Joussen said. “The next step is that the whole inventory will be on the blockchain.”

Using smart contracts, which are simply code snippets which execute automatically on the blockchain, TUI’s Joussen argues it can easily manage and automate a large part of bedstock and hotel capacity between all the markets it operates in. “It’s cheaper, has a higher performance, and is accessible from everywhere – it’s a pure cost equation,” Joussen said. 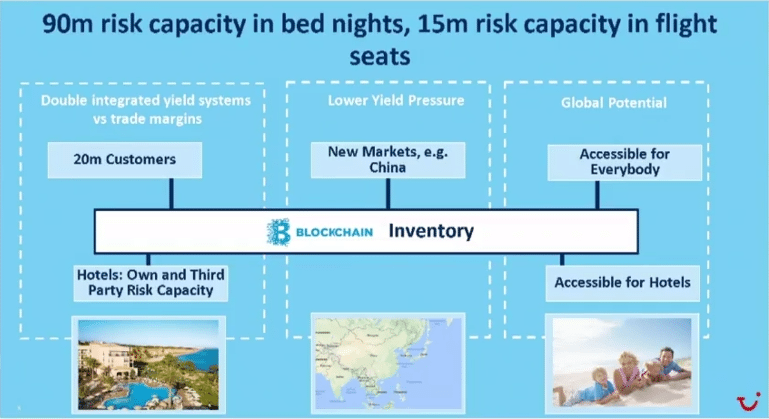 TUI’s presentation slide at the NOAH Conference in Berlin

Moving all the inventory onto the blockchain is a more complex operation but could allow TUI to create one large database that is updated live with all its availability.

TUI has also been in talks with Winding Tree, a company based in the Bay Area that’s looking to build a decentralized travel distribution platform. While TUI’s blockchain is currently private, and the company would see no major economic benefit in opening it to the public, Winding Tree is building a public blockchain for the travel industry.

Winding Tree would also make no profit on transactions and distribution on its platform as it will be fully decentralized. The company is instead turning to an ICO to fund its project. ICOs (Initial Coin Offering) are the fundraising mechanism decentralized organizations use to raise capital. Tokens, which are the fuel of the blockchain, are sold at an auction with parallels to an IPO. Recent successful ICOs include Bancor, which raised $150 million, Status [$100 million] and Tezos [$200 million so far and still going].

“The oligopolistic landscape today in travel leaves the legacy players with no economic incentive to innovate and creates far too-high barriers of entry for start-ups. Even if the occasional one succeeds it ends up acquired by one of the large players,” said Maksim Izmaylov, founder of Winding Tree. “We are building a platform for travel distribution without middle-men and blockchain is the tool that allows for it. We want to give the distribution power back to the individual hotels and airlines.”

When asked about the TUI blockchain initiative, Maksim said “the value of blockchain lies in its security which increases in relation to its use. Therefore public blockchains are vastly more secure than private ones. We also believe that no single company should own travel distribution.”

If the travel industry were to adopt a blockchain for distribution some business models would likely see significant changes. While online travel agencies are considered by some to be the middle-men that blockchain would replace, they would most likely be the least affected in terms of business model change.

Blockchain is essentially a large database, where querying a hotel in Berlin might return 800 properties. Search companies would most likely still operate to help users find exactly what they’re looking for and offer a curated list of hotels.

What would change, however, is the barrier to entry for startups as anyone would be able to source rooms from the blockchain and thereby the market would see increased competition rather than intermediaries setting the distribution rates.

In theory, it would be entirely up to the hotels and airlines to decide whether to pay out a commission and, if so, how high it should be.

Metasearch companies may be more affected by such a technology as their business model relies on leveraging the current flaws in distribution and the price differentiation they bring.